Home › Blog › Moles In West Chester Can Tear Up Your Yard

Moles In West Chester Can Tear Up Your Yard

Summer is the season when lawns are supposed to look their best. While some of us pride ourselves on the aesthetic of a well-kept lawn, there are quite a few animals that appreciate our lawn for different reasons. Moles are a common concern for local homeowners. Masters Touch Pest Solutions provides pest control in West Chester that will rid your lawn of moles and the damage they can do. 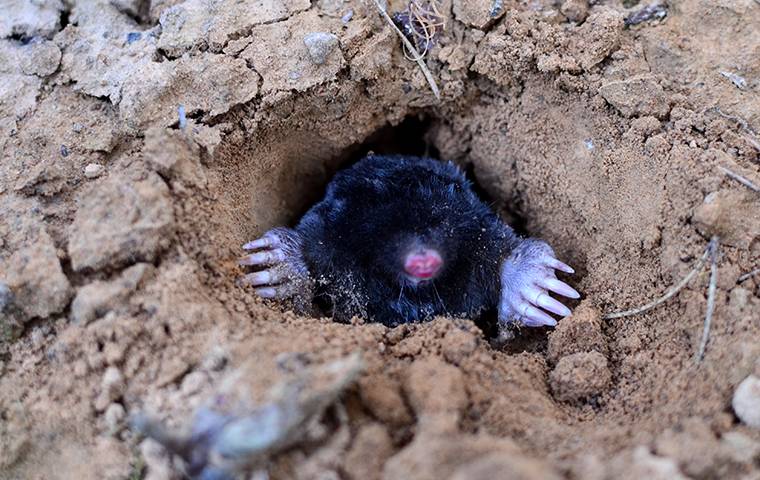 What Is A Mole?

Moles are subterranean mammals. They dig tunnels and search for insects or worms to eat, which is why lawns and lawn soil are so appealing. They find many insects on the surface, even though they don’t like to live up there. They emerge and push up mounds, ruining lawns.

These burrowers can’t see well, and their eyes are not equipped for the sunlight on the surface. They can dig forward and move backward through their tunnels thanks to their unobtrusive hind legs. The good news is they’re solitary animals. If you have a mole problem, it will usually be no more than two to three of them per acre.

Pennsylvania has three species of moles: the eastern mole, the star-nosed mole, and the hairy-tailed mole. Common attributes of all species are:

The star-nosed mole has many pink tentacles at its snout, which look like two strange flowers. The other two species will have a normal pink snout.

What Causes Moles To Suddenly Start Coming To My Yard?

Lawns naturally attract moles because they have many insects and worms on the grass and in the soil. Moles will dig in from underground and pop up to find food, then retreat backward. Things that attract moles are:

Moles can eat their body weight in insects per day. If you see a lot of beetles or other insects, moles will feel invited. Their runways tend to align with manmade landscaping layouts, and they’ll often follow pathways or fences, focusing on roots as a good spot for them to find their food supply.

How Can I Get Moles To Stop Ripping Up My Lawn?

Each time a mole emerges, it creates piles of dirt. This can destroy a lawn quickly, uprooting grass. To practice effective mole control, consider the following:

Preparing for mole invasions can take a lot of time, and chances are, they’ll already have an extensive network if you’re concerned. At Masters Touch Pest Solutions, we use humane mole pest control methods to relocate them so they can live the rest of their lives away from your property. We will also help get you set up for ground mole control in the following seasons and years. Call us today for a free estimate.

I have used Master's Touch Pest Solutions for many years. Their professional and friendly staff have offered great and efficient pest service. Using them on a regular basis has allowed me to keep the many outside creatures from being unwanted inside guests.